Voters in the largest county in Illinois overwhelmingly approved a ballot question calling for the legalization of marijuana on Tuesday.

The measure in Cook County — the nation’s second-most-populous county, which has more residents than 27 states of the union — is not binding, but its passage sends a strong message to state lawmakers that ending cannabis prohibition is an issue that voters want the legislature to address.

The question, approved by voters with a greater than two-to-one margin, reads:

“Shall the State of Illinois legalize the cultivation, manufacture, distribution, testing, and sale of marijuana and marijuana products for recreational use by adults 21 and older subject to state regulation, taxation and local ordinance?”

Statewide, voters also went to the polls on Tuesday to select party nominees for governor and attorney general, contests in which the candidates’ positions on marijuana legalization has been a key issue.

“We can begin by immediately removing one area of racial injustice in our criminal justice system,” he said during a victory speech Tuesday night. “Let’s legalize, tax and regulate marijuana.”

During the course of the campaign, Pritzker repeatedly promised to legalize cannabis.

“I also support legalizing and taxing recreational use of marijuana, which is estimated to generate as much as $700 million a year for the state,” he said. “No more studies are needed to show it’s time for Illinois to safely move forward and legalize marijuana. As governor, I will modernize drug laws and move Illinois towards a criminal justice system that gives all Illinoisans a chance to reach their full potential.” 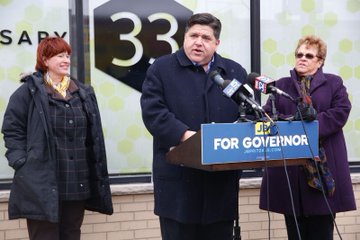 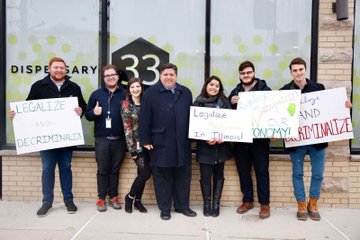 Our state should legalize marijuana. This is not a moment for a governor who stands with Donald Trump.

Instead of modernizing our approach to sentencing and moving our country forward, today’s announcement by the Trump administration directly attacks the black and brown communities most disparately affected by our broken system.

As governor, I will stand up to Donald Trump’s attacks on Illinois communities, legalize marijuana, and modernize sentencing guidelines to create a criminal justice system that gives all Illinoisans a chance to reach their full potential.

“Criminalizing marijuana hasn’t made our communities safer, but has disproportionately impacted black and brown communities,” Pritzker also said. “The criminalization of cannabis never has been and never will be enforced fairly, and it’s time to bring that to an end. To right past wrongs, we also have to commute sentences of people in prison who are there for marijuana offenses.”

While incumbent Gov. Bruce Rauner (R) signed into law a measure to decriminalize cannabis possession last year, he opposes broader legalization and has threatened to veto it if approved by lawmakers.

Rauner narrowly won nomination to seek reelection on Tuesday, and cannabis is likely to be a focus of debate as the general election approaches.

Aside from selecting the state’s next governor, voters across Illinois may get a chance to weigh in more directly on marijuana legalization in November. Earlier this month, the Senate approved legislation for a nonbinding statewide ballot question on the issue, which is now pending in the House.

In recent months lawmakers have also held a series of hearings on legislation that would end cannabis prohibition without referring the question to voters, but leaders have not yet scheduled House or Senate votes.

Harold has said officials should “begin the process of methodically analyzing and negotiating appropriate safeguards and regulatory frameworks” for legal marijuana.

“If approached in a thoughtful and deliberate manner, legalization should enable law enforcement officials to redirect their time and resources towards addressing more critical issues (such as the opioid epidemic), expand Illinois’ tax base, and decrease the number of people serving sentences for non-violent, marijuana-related offenses,” she said.

The state should end prohibition “in a manner that appropriately regulates manufacture and distribution while taxing it [to] capture the new economic activity that would accompany recreational use,” he said.

During a debate last month, the incumbent congressman claimed he supports allowing states to set their own marijuana policies. “I would allow the states to do what they are going to do,” he said.

But in the House Lipinski has consistently voted against measures to protect state medical cannabis laws or broader legalization policies from federal interference.

Lipinski narrowly won renomination over Newman, but the statements he made during the primary will surely be used by activists to pressure him to begin voting differently on marijuana measures in Congress.

https://www.youtube.com/watch?v=yjP2k3dyq48 In a scathing op ed, Rachel Maddow of MSNBC goes on a 20 minute tirade about the historical implications of the current managment of...

Can you get paid for a 2hr lunch? Only if you vote!